The most striking thing about the camp is the phenomenal hospitality shown by everyone here, all in spite of the extreme adversity.  So much about the conditions here is shocking and makes life for people full of suffering. The warmth and kindness is a code they live their lives by and it seems to be the most important thing that helps make life just about liveable for the residents.   The welcome and generosity at my host’s place is exceptional in itself but the welcome is extended everywhere I go.  Smiling and saying “hello, you are welcome” is almost universal as are the offers of tea, coffee and a visit to family homes, the Arabic “howloo” means something to the effect of- ‘come and join with us at our home’. We hear this everywhere and take up the offer when possible- the invitations are so frequent that to accept even half would prevent any other trips! Contrast this with our prevarications in Europe on whether to welcome refugees and it is for me a source of deep shame which exposes deep flaws in our culture which seems more selfish and individualistic than I had ever realised.  Far from outsiders like me coming here to offer anything to Palestinian refugees, it feels like a one way street where the people educate me at every opportunity on what kindness, hospitality and community really means.

To further underscore this point, I arrived here with the flu and was worried about transmitting the virus to anyone. After a few days here, I asked tentatively whether or not anyone had caught anything from me. Hoping noone would say yes, Melad told me that Khalil, who we share sleeping space with had a chest cough.  I was desperate to apologise for this and I would have offered to find another place to sleep. Khalil said without a hint of facetiousness that it’s good to suffer such a cough a few times a year so he was grateful that I had given it to him. That encapsulates so much about the warmth and decency of my hosts.

The other day I met Hussein who is a deaf-mute father of three. He approached me to shake hands and insisted that I go join his family for tea, cake and perhaps smoke some sheesha. I don’t understand Arabic and sign language I can only guess at but somehow we managed to communicate just with basic signs and gestures.  He is living in the bombed out ruins of his old home, sharing with another family. His son had fallen from the rooftop and injured his eye badly which needs treatment he cannot afford.  Hussein worked as a labourer for UNRWA for years but was recently made redundant due to his disabilities. There seeems to be widespread discontent at some aspects of the role of UNRWA here. The 8 years it’s taken them to reconstruct less than half of the camp and the withdrawal of funding for some other projects are causes for discontent among most. It’s hard to imagine what other work will be available for Hussein in the future and with a wife a three young children to support, one who needs medical care, it seems a hopeless situation for him. Nevertheless the welcome he showed me was as warm and generous as any at the camp. His brother Yousaf is also deaf-mute and unemployed as is another brother who I didn’t meet. They lavished me with tea and cake and sheesha and Hussein was delighted to show me the treasures he keeps in his home, a giant turtle-shell which adorns the wall which I’m pretty sure he was telling me he caught himself he also prouly showed me some ancient artefacts he had found on the beach, a plum-line and some pottery. After a tricky climb onto the roof of his bombed out home I was surprised to see he keeps hundreds of pigeons, they are his pride and joy and he was delighted to be able to let me help feed them.  Sitting round with Hussein’s family and some other relatives who also joined us, a young man told me that the whole camp are waiting to all travel together to Canada. The joy in his eyes was for me sad beyond belief. I knew this mass exodus was simply not possible and when some of the girls asked me if it was true I could only tell them that I didn’t think so. They didn’t translate what I said to the young man. 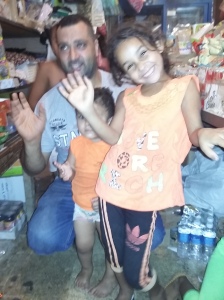 Another of the many conversations I have had here, again relating to an escape, a friend of Melad wanted to ask me if I know the best way to get to Europe, Germany in this case and what I can do to help get papers for him, perhaps if I could make an invitation letter from the UK which would facilitate this.  As we talked, all I could tell him was that the policy of European states, especially the UK was to make it as difficult as policy to claim asylum, that to recieve papers while still in a refugee camp was near impossible and that the only possible way to get there was the desperate journey over the water to Turkey and then onwards via Greece or elsewhere. This man wasn’t prepared to risk his family on the journey so as with so many others, resignation and hopelessness seemed to be his reaction. I wish I could give different answers to these questions.   I could recount dozens of other similar meetings and conversations here, every single person is resigned to the fate that leaving here is the only option, even after 70 years here and 2,3 and 4 generations, the overwhelming desire and necessity is to leave their lives of suffering in Nahr al Bared.

If you are interested in my work , are seeking more information or would like to publish any of the stories that feature in this blog please contact me at strathclydepipers@hotmail.co.uk.