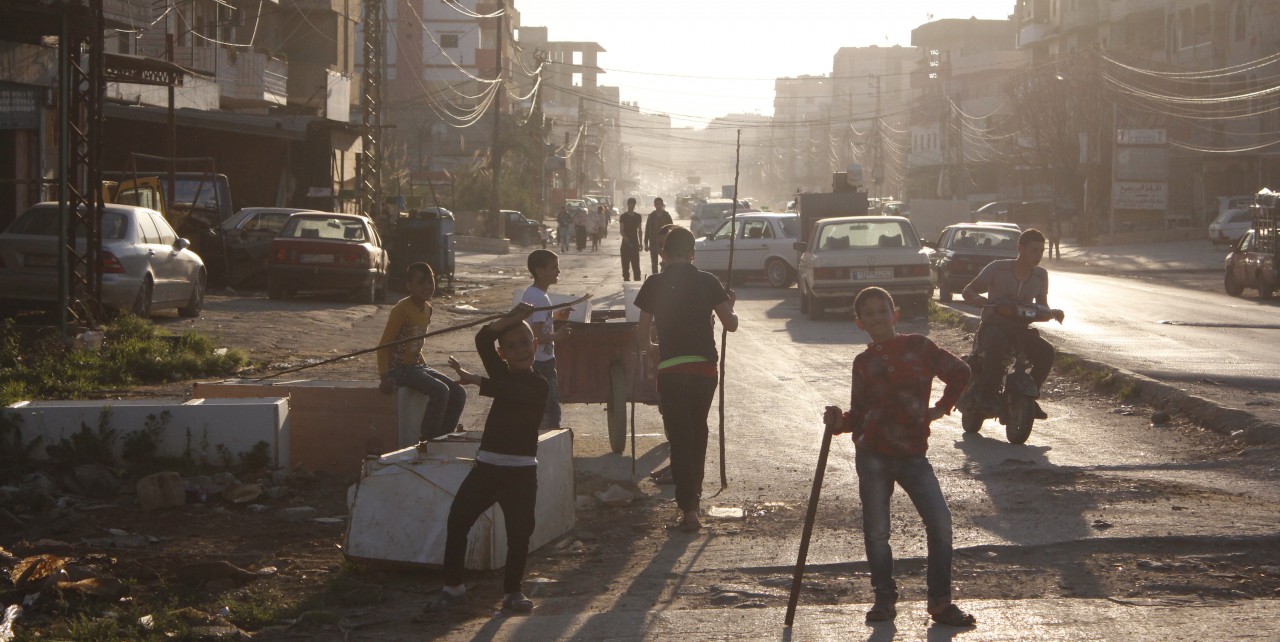 We visited an Informal Tent Settlement (ITS) a few days ago which is about 2 miles from the ‘settled’ refugee camp I’m staying in. The situation here in the surrounding area is less acute than in the Bekaa valley I’m told. There are tent settlements scattered throughout the countryside every few hundred metres or so. Each one home to several hundred Syrian refugees. My host Melad works with the children in this area and has good relationships with the men who live here. With the NGO Warchild I will be working with these children also. Melad is a third generation Palestinian refugee so it was interesting to see the solidarity shown from Syrians to Palestinians. One of the men told Melad that his children had fought and died fighting for Palestinians during the revolution. That’s solidarity. Palestinians in the region, such as my friends in Nahr al Bared have been there since 1949- 66 years! Without the potential for return to Syria then these ‘tent villages’ may start to resemble Palestinian camps over time. Palestinians themselves spent their first few decades in exile living in tents.

In Nahr al Bared itself there are between 2-3,000 Palestinian-Syrian refugees. These are Palestinian refugees, exiled from Palestine during the 1948 ‘Arab-Israeli war’ (others also fled the 1967 ‘six-day war’) who settled as refugees inside Syria but who have recently been made refugees yet again. Some fleeing Assad, others fleeing Daesh (ISIS) as in the case of the Yarmouk camp as I was informed by former Yarmouk residents in Nahr al Bared- one side is besieged by Assad and the other by Daesh. The exodus of Palestinians from Syria and the likely exclusion of them from EU asylum policy, given they are not technically full citizens of Syria, highlights the fluidity and complexity of the situation and also urges that all refugees are consulted and considered when searching for real solutions to the current crisis.

As with all refugees I have met they were immediately welcoming and happy to share what they have with outsiders. We ate a meal and then they offered Sheesha. Unfortunately I don’t know Arabic so I wasn’t privy to the entire conversation Melad had with the men from Homs. They did tell me about one child they had with them who’s parents were killed during the Assad government’s onslaught against rebel held Homs more than 3 years ago. The young child, Faraz, had travelled with his neighbours to this camp in Lebanon.

The residents had been at this camp for 3 years now and are searching for ways to move on. There is some limited schooling available to the kids here and NGOs like warchild help provide other services. Some limited opportunities for seasonal work is available for the adults in the surrounding farms, this with dubious legality and naturally, very low wages. Even with the small comfort provided by these limited opportunities, it is a cramped space on a rented field and is certainly not somewhere for any number of people to stay for a long period of time. 3 years in this place must be torture. Melad pointed out to me several other areas where there had been ITSs which had been moved. The local farmers rent plots of land via the UN and other agencies so when any contract expires the people are vulnerable to being moved on again. There was one camp by the barren coast-line where a whole settlement had been moved, yet one elderly man remained. He was living in a dilapidated makeshift tent in the middle of the field.

We are on the western slopes of the snowed capped Mt. Lebanon mountain range, the winters are cold and wet, though not as harsh as those in the Bekaa valley on the other side of the mountain range where there are many more refugees. One thing I noticed about the camp was that it consisted mainly of women, children and elderly men, presumably these are the ones not yet able to make the perilous sea crossing to Turkey or Europe. They did say that they planned on making the journey, perhaps they were waiting for the ‘right time’. I don’t know but it’s clear that 3 years and counting in this purgatory only makes the sea voyage more appealing by the day.

If you are interested in my work , are seeking more information or would like to publish any of the stories that feature in this blog please contact me at strathclydepipers@hotmail.co.uk.